The Craziest NFL Result From These Stats You Will Ever See

Hat Tip:  John Lopez and Landry Locker on their Houston "In The Loop" show on Sports Radio 610 Houston were discussing this amazing game that took place in Pittsburgh's Heinz Field in the Houston Texans expansion season in 2002.  The reason they were discussing these memories of the Texans first season in a game against a great Pittsburgh Steelers team is because the Texans are playing the Steelers this Sunday in Heinz Field.

On Dec. 8, 2002 the expansion team, Houston Texans, invaded Heinz Field to play the powerhouse Pittsburgh Steelers for the first time ever.  Everyone, even in Houston was expecting a blowout and a blowout it turned out to be.

Before I tell you what the score of this blowout was, I will give you the stats of the game and let you guess how much you think the Steelers beat the Texans by [and please don't look down at the answer].

Here are the stats: 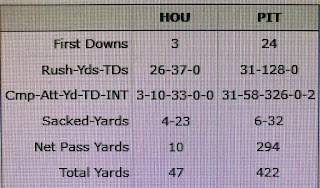 Yes, I know by these stats you are thinking, wow, what a one-sided blowout this was and it was.  So, what is your guess on how much you think Pittsburgh won this game by?

Bzzz, time's up.  Whatever your guess was it is wrong.

I know...impossible, incredible, amazing....use any hyperbole you can think of and it describes the results of the game coming from these stats.  How was this possible? Because I didn't reveal these stats-the turnovers. While the Texans offense was pathetic, as you can see from the stats and put the defense on the field way too long [resulting in a lot of yards given up], the defense overcame the offense by shutting the Steelers down from scoring and they actually scored with their defense [something the offense couldn't do]. While the Texans had only one turnover...because they punted all the time :-), the Steelers had 5 turnovers...3 of which the Texans returned for Touchdowns [all the TD's the Texans would get that day]. The Texans defense had 2 pick 6 interceptions, and they returned a fumble for a Touchdown.

Do you think we will ever see another NFL game with those stats having such an incredible result like this again?  I don't think so.