If I Had To Choose One Favorite Song

If I was forced to choose one, just one favorite song of mine of all of them, it would be Simon and Garfunkel's "Bridge Over Troubled Water".

This song was composed in 1970 by Paul Simon and sung [solo until the final verse] by Art Garfunkel. 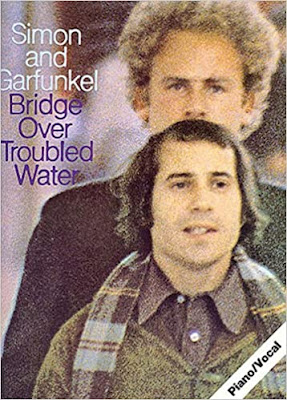 From the Goldmine Website, Paul Simon is quoted as saying, “Bridge Over Troubled Water” is inspired by two different sources, both of which are not too far away from Elvis Presley. One is The Swan Silvertones, that was Reverend (Claude) Jeter, who I became friends with, and the other is a song on The Everly Brothers album, “Songs Our Daddy Taught Us.”  If I pointed them out to you you’d say, “I guess I hear it” but in some way both of those things fed into what became “Bridge Over Troubled Water.”

The great lyricist, Simon, continues in the article, "The experience of writing it was unique. I was in my late 20s and I wrote it in a night.  The music and lyrics came completely naturally. It was like a gift. Because I hadn’t experienced one with that intensity before I didn’t think anything of it other than, “That’s unusually good for me.”  It was better than I usually write."

With the poetic beautiful words of Paul Simon combined with the beautiful voice of Art Garfunkel, this became a triumphant giant song in music history...and my favorite of all!

Please turn up the volume and enjoy the original version of Bridge Over Troubled Water followed by a symphony orchestra [music only] version.