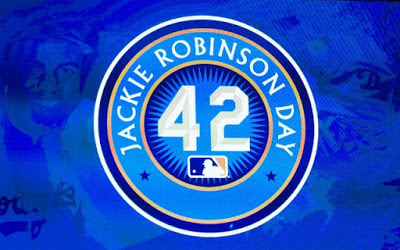 While Major League Baseball is at a pause because of the effects of Covid-19, that does not put a pause on honoring the great American patriot icon, Jackie Robinson-as today April 15 is Jackie Robinson Day!  Started on April 15, 2004, today is the 16th anniversary honoring Jackie Robinson.


If major league baseball were ongoing, every MLB player in every major league park would wearing #42, Jackie Robinson's number that he wore with the Brooklyn Dodgers.

Jackie Robinson is the only player in baseball to have his number officially retired by MLB [meaning no player can ever again where the number 42 on any team in Major League Baseball].


From my post: "MLB Honoring the Great American Jackie Robinson #42":  "Major League baseball honors Jackie Robinson, the first black American allowed to play in the segregated major leagues when he started for the Brooklyn Dodgers at first base on April 15, 1947.

"Jackie Robinson has to be regarded as one of the top Americans who influenced civil rights in our history, along with great figures like Rosa Parks, not just for being the first black man to play Major League Baseball, but for having to endure unspeakable acts of bigotry against him for "daring" to break the color barrier in baseball. He not only endured them, but he faced them down with courage and grace, in overcoming the bigots.  And now Major League Baseball rightfully honors Jackie Robinson every April 15, as every major league baseball player wears Jackie Robinson's number 42."

From a previous post : "My wife and I went to see the movie "42" and I can report that this is a must see movie by every American.  We thought it was a great  moving movie that ended in applause by the entire theater and tears in many eyes [I know there were some in Sheralyn's and my eyes].  While Jackie Robinson passed on October 24, 1972, what is great is that Jackie Robinson's wife, the graceful Rachel Robinson is still living and getting to enjoy this celebration of her beloved Jackie."