We are one year almost to the day of this amazing coincidence [scroll to bottom of this post] from the Super Bowl, now 51 years ago, when the Chiefs won their first Super Bowl. Here is this repeat post from a year ago:
Congratulations to Coach Andy Reid and the Kansas City Chiefs coming back from 10 down midway through the 4th Quarter to win Super Bowl LIV 31-20 over the San Francisco Forty Niners.  It had been 50 years ago when in Super Bowl IV the Kansas City Chiefs had won the Super Bowl, 23-7 over the Minnesota Vikings. 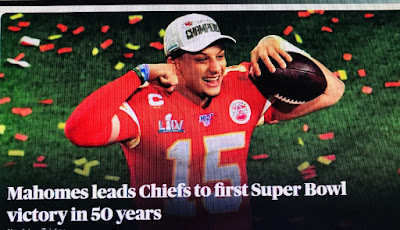 Now here is something I find amazing and kind of heart warming.  Who called the play by play on TV of  Super Bowl IV when the Chiefs won their first Super Bowl?  It was the legendary late Jack Buck, someone who I believe can be among those considered as the GOAT of sports announcers.   And who just called Kansas City's second Super Bowl win 50 years later?  None other than Jack Buck's son, Joe Buck.  Wow!  What an awesome feeling and honor that must be for Joe Buck to follow in his father's foot steps.