Fly Me To The Moon

On this Monday, July 20, 2020  the nation celebrates the 51st anniversary of Apollo 11's lunar landing - where Astronaut Neil Armstrong was the first human to take a step on the moon. 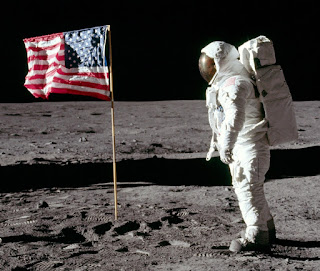 So, to celebrate this great accomplishment by America, enjoy some great music that I hope you will enjoy.

One of the great movies celebrating the astronauts and their ventures into space was "The Right Stuff."  For those who saw the movie, I think you will remember the electrifying triumphant music that accompanied the astronauts walk down the walkway at the Space Center.  Part of that exciting music came from a variation of a theme of one of the greatest Violin Concertos ever composed [in my opinion, the greatest] by Peter Ilyich Tchaikovsky.  It came in the first movement of the concerto, and this movement is so exciting, when I saw it performed a couple of years ago by Joshua Bell in Jones Hall in Houston, I saw something I have never seen before in Jones Hall.  At the end of the first movement, there wasn't just an ovation from the audience [which I have seen before after the first movement] but there was a standing ovation for Joshua Bell.  Usually in a concerto or a symphony, the fireworks won't occur until the final movement.  In the Tchaikovsky concerto, there are fireworks after the first and third movements.  In the video below the theme I am talking about comes at the 6:20 mark.

The late 19th early 20th great French composer, Claude Debussy, composed one of the most relaxing, pleasant and beautiful piano pieces in his famous, Clair de Lune [moonlight].  This is the third movement from his Suite Bergamasque and is sometimes played as a stand alone song.

And speaking of moonlight, we cannot forget one of Beethoven's great piano sonatas, #14 in C-Sharp Minor, "The Moonlight", named after the wonderful adagio sostenuto first movement.

So, to celebrate the 51st anniversary of the USA's accomplishment of having the first man to walk on the moon, please turn up the volume and enjoy these 3 great classical music pieces, plus a couple of other classic [not classical] songs.


Frank Sinatra: Fly Me To The Moon: