On Facebook this morning, Wednesday July 31, I saw this post by my good FB friend, Tom Zampino, that I really loved.  It was simply this message: 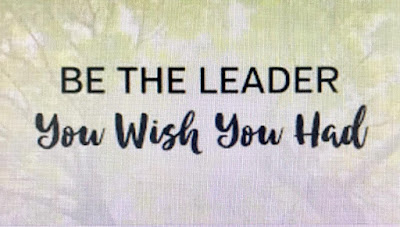 When I replied to Tom [a man of great wisdom who I have learned so much] that I loved that message even though I have never considered myself to ever being a leader, he replied back, I "believe that on multiple levels we are all leaders, it doesn’t have to be limited to the workplace. We are often leaders simply in how we interact with others. People look up to us - children, colleagues, neighbors. Our example has a great impact!"

Wow, I thought he was right. And then on this same day, to reinforce Tom's message, I heard this show on Sports Radio 610 in the morning, with Sean Pendergast and Seth Payne, this audio from the Coach of the Tennessee Titans, Mike Vrabel, speaking at a media event in Nashville, I believe.

Mike Vrabel was the previous linebackers coach and defensive coordinator for the Houston Texans from 2014-2017. He was there when Deshaun Watson became QB for the Texans. During that time period Mike, a coach [teacher], actually learned a life lesson from a young 21 year young man just out of college.  So, in this case you could say the pupil was teaching the teacher.

Please listen to the following words by Coach Vrabel, talking about the important lesson he learned from a young man, Deshaun Watson, QB of the Houston Texans-audio taken from Sports Radio 610: July 31, 2019: