Do The Houston Texans Really Need A Head Coach?

I usually write my posts for all in mind, but this satire post will only be understood by Houston Texans fans who are also fans of Sports Radio 610 in Houston, as it will involve Sports radio 610's hosts: from Mad Radio - Seth Payne and Mike Meltser; from In the Loop -John Lopez and Landry Locker; and from the 'Triple' Threat - Sean Pendergast, Rich Lord and a player to be named later.  All of the "Tales" fans will be free to read, but for those not in Houston you will be wondering, what the hell is the Tales talking about.  :-)   Of course, those in Houston probably also will be asking, what the hell is the Tales talking about. 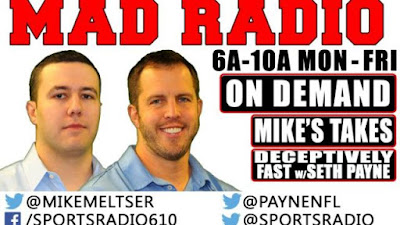 So, without further ado, Do The Texans Really Need A Head Coach?:

It was late one Friday in May when the Houston Texans made the shocking announcement that their head coach for the last 5 years, Bill O'Brien, had been fired by Jack, I mean, by owner Cal McNair.  It seems Cal McNair was convinced by newly hired from the New England Patriots, Texans' executive [pastor-motivator-and know it all...I mean, jack of all trades] Jack Easterby, that the Texans really needed to hire Bill Belichick away from the New England Patriots.  "Do you really think he will want to come here and we can get him?", Cal asked Jack.  "Cal, Cal, Cal", replied Jack Easterby, "I know Bill Belichick, Bill is a friend of mine...oh, and by the way I just happened to have a 6 hour talk with him in a cafeteria recently."

So, Cal convinced that the Texans really needed to make Bill Belichick their head coach, had to reluctantly [don't let the door hit you on the way out] fire Bill O'Brien.

On Sports 610 radio in Houston, there was a consensus Cal, cajones, McNair made a brilliant move by firing O'Brien.  Seth, Mike, John, Landry, Rich and Sean all thought this Belichick guy was a pretty good, under the radar, coach.  Brilliant shouted "not talking about it" guy, Landry Locker.  He was the first one to state, that no one else was even thinking about, that Bill Belichick was a good head coach.  Excitement was reigning in H-Town.

But alas, an ointment was thrown in the way of the Texans hiring Belichick. The upstanding righteous New England Patriots organization had filed tampering charges against the Texans.  Oh, and the announcement of the tampering charges, just by coincidence, were released late the next Friday evening.  Blasphemy, yelled Seth Payne.  "Proof, I want to see proof, Patriots."

Well, exactly one week-yes, again late on a Friday afternoon-it was announced by the Texans' Mr. Cajones Cal, that he was dropping trying to make Bill Belichick their head coach and the Patriots, just by coincidence, were dropping their tampering charges on the Houston Texans.  Nothing to do with the tampering charges, stated McNair, we just found out that it was in Belichick's contract that we couldn't actually talk to, much less hire, Bill away from the Patriots.

So, in the following week, when the search for a new Texans' head coach seemed to come to a standstill, a great pall seemed to hover over Houston.  Did we fire Bill O'Brien for nothing? Can we possibly, now, get a head coach as good as Billie has been?  Landry Locker and Sean Pendergast argued that they didn't think the idea of Belichick as our head coach was done.  "He wants to come here", said Landry. "I really think we are all missing this silver lining, that we will still get him, for maybe a number one and a number three and a number four, five and six draft choice...I think it's not out of the question."

Hold your horses, cried frequent contributor to Sports 610 Radio and Hall of Fame journalist, John "The general" McClain.  All of you guys and all of the Texans' fans should stop your whining.  They know what they're doing up there.  And by the way, we still have all the other coaches doing their thing.  Nothing is going on now and nothing changes even if we can't hire a new coach. They'll still be there and so will Easterby and Cal McNair...they can get together and make all the decisions O'Brien would have made. "Everything remains the exact same" lectured, I mean, said the general.  "But what about the on the field clock management decisions that needed to be made on the spot?" questioned Mike Meltser.  Seth Payne and John Lopez came back at Mike, "Do you realize who has been making the clock management decisions the last 5 years?'  "Ah, fair" said Mike.

Now it has been two weeks since there has been any words from the Texans.  What are the Texans doing?  Or they looking for a new head coach?  Or they still trying to get Belichick from the Patriots?  Or they going to go with a group, no one is responsible, head coach?

Mike Meltser came back again and again I thought making a good rhetorical question to his partner, Seth Payne.  "Shouldn't we hear something from Cal McNair?  And it doesn't have to be right away, but at least when they have come up with a plan or a decision on what they are doing."

Jack Easterby, hearing of Sean's great treatise and not exactly trying to quiet Sean's suggestion, could only be heard saying, "Let us all pray."

That’s so damn funny 😄 and you’ve characterized the 610 crew perfectly! Please send that to their twitter or FB accounts NOW!

GMTA bro. I just did.