A 'Sweet' Victory For the University of Houston Cougars

With the NCAA Basketball Tournament, that would have been in high gear at this moment, being canceled, fans of the University of Houston Cougars [like me] will never know how far our very young, exciting team of 2020 would have gotten this year.  Would our great Coach Sampson have led them to back to back Sweet 16 appearances?  One thing we do know, with almost our entire team returning next year, and with Coach Sampson leading us [UH men's Basketball team], we should have a great, great team next year.

With that in mind, let us go back in time almost one year to the day when the University of Houston Cougars beat Ohio Sate to make the Sweet 16 for the first time since 1984.


For the first time since 1984, where the Akeem [sic] Olajuwan and Clyde Drexler led Phi Slama Jama team did it, the University of Houston Cougars have made the Sweet 16 in the NCAA Tournament with a 74-59 victory over Ohio State.

Thank you, Coach Kelvin Sampson for bringing the Coogs back to NCAA basketball relevance once again!  If he is not the coach of the year in the NCAA men's division 1 basketball, then there should be an investigation.

What makes this victory doubly sweet [see where I'm going there], is because of the UH Cougars heartbreaking loss on a buzzer beater to Michigan last year, where a victory would have put them in the Sweet 16 then.  Think about that - most of the players who suffered that devastating loss are back on this team, and they came all the way back this year, with that loss haunting them, to erase the bad memories of last year to a sweet celebration this year.  And they have done it in style as this Cougars team has now won 33 games [33-3], more than any team in Cougars history.

Doubt me that last year's heartbreak was on their mind to overcome.  Check out this tweet last night from the Houston Cougars star guard [and one of the best shooting guards in the nation], Corey Davis Jr.: 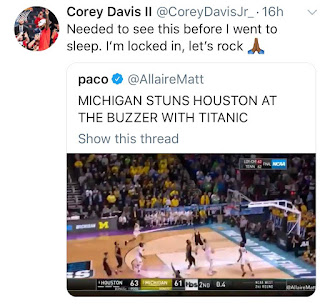 You did Corey and the whole team as you were all 'locked in' to not be denied.  As a big Cougars fan and a big fan of the city of Houston, Thank you Coach Sampson and the Houston Cougars.

This was a sweet victory indeed for the Houston Cougars - a Sweet 16 victory, that is!