It has been a truism in most sports and especially in the National Football League, that defense wins championships.  It will be said you play defense to win and offense for show. And for a long time in the NFL that had been true-indeed the teams who had won the Super Bowl were indeed also one of the best defensive teams [in stats] in the league.

That truism has not always held true lately.  What about in this 2018-19 NFL season?  There are four remaining teams still alive to win the 2019 Super Bowl Championship: New England Patriots, Kansas City Chiefs, New Orleans Saints, and the Los Angeles Rams. These four teams left have some amazing offensive and defensive stats that belie that truism that it is defense that wins championships.

First check out these top teams in scoring for the 2018-19 season: 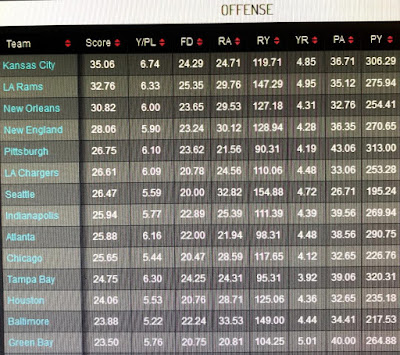 The top four teams in offensive scoring in the NFL are the four teams left in the playoffs: KC number 1; LA Rams number 2; New Orleans number 3; and New England number 4.