George Washington's Letter To The Jews of Newport

One year ago, October 27, 2018, the nation mourned the horrific massacre by an evil anti-Semite at a Pittsburgh Synagogue, L'Simcha, "Tree of Life", Congregation.  The murderer killed 11 Jews and injured many more.

In the wake of this, my brother reminded me of an historical event 229 years ago, when President George Washington wrote a moving letter to the Jews of Newport, Rhode Island.  That letter is at the bottom of this post. 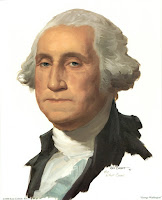 We learn of this history from the Touro Synagogue 'National Historic' web site on "George Washington and his letter to the Jews of Newport":


"On the morning of August 17th, 1790 George Washington arrived in Newport, Rhode Island." … "Washington and his group were greeted by Newport’s leading citizens and representatives from the many religious denominations present in the city, including the Jews."  … "Among them was Moses Seixas, one of the officials of Yeshuat Israel, the first Jewish congregation in Newport.  The address read by Seixas was an elegant expression of the Jewish community’s delight in Washington as leader and in a democratic government.


Seixas wrote:  Deprived as we heretofore have been of the invaluable rights of free Citizens, we now (with a deep sense of gratitude to the Almighty disposer of all events) behold a Government, erected by the Majesty of the People—a Government, which to bigotry gives no sanction, to persecution no assistance—but generously affording to All liberty of conscience, and immunities of Citizenship: deeming every one, of whatever Nation, tongue, or language, equal parts of the great governmental Machine.


"A few days after leaving Newport, the President wrote to the citizen groups who had addressed him at Newport, thanking them for their hospitality and graciousness.  First among them was his letter to the Jews.  More than simple courtesy, the letter reflected the policy of the new government toward those whose religious beliefs were perceived as different.  Washington echoed Seixas’ phrase “which to bigotry gives no sanction, to persecution no assistance,” thus confirming the sentiments expressed in the Seixas letter.  The President’s words also helped to define the role of the Federal government in matters of conscience."

From Touro Synagogue here is President George Washington's letter "To The 'Hebrew' Congregations of Newport":

While I received with much satisfaction your address replete with expressions of esteem, I rejoice in the opportunity of assuring you that I shall always retain grateful remembrance of the cordial welcome I experienced on my visit to Newport from all classes of citizens.

The reflection on the days of difficulty and danger which are past is rendered the more sweet from a consciousness that they are succeeded by days of uncommon prosperity and security.

If we have wisdom to make the best use of the advantages with which we are now favored, we cannot fail, under the just administration of a good government, to become a great and happy people.

The citizens of the United States of America have a right to applaud themselves for having given to mankind examples of an enlarged and liberal policy—a policy worthy of imitation. All possess alike liberty of conscience and immunities of citizenship.


It is now no more that toleration is spoken of as if it were the indulgence of one class of people that another enjoyed the exercise of their inherent natural rights, for, happily, the Government of the United States, which gives to bigotry no sanction, to persecution no assistance, requires only that they who live under its protection should demean themselves as good citizens in giving it on all occasions their effectual support.


It would be inconsistent with the frankness of my character not to avow that I am pleased with your favorable opinion of my administration and fervent wishes for my felicity.

May the children of the stock of Abraham who dwell in this land continue to merit and enjoy the good will of the other inhabitants—while every one shall sit in safety under his own vine and fig tree and there shall be none to make him afraid.


May the father of all mercies scatter light, and not darkness, upon our paths, and make us all in our several vocations useful here, and in His own due time and way everlastingly happy.

To read the whole article/history of President Washington's letter to the Jews of Newport, please click this link:  Touro Synagogue.org