Jose Altuve Is A Man, Yes A Big Man

As the Houston Astros have made the American League Championship Series for the third straight year, I think it appropriate to repeat this post about a really big man, Jose Altuve, the great second baseman for the Astros. 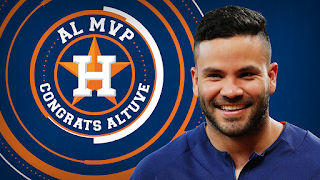 My tribute to the big man from Venezuela of the Houston Astros, second baseman, Jose Altuve, the 2017 American League's MVP.  The man with the most hits in baseball the last four years, and the man who helped bring Houston's first World Series Championship in their history.  Jose Altuve, in a special way only way he could say, said after a huge victory in the ALCS against the Yankees in 2017 that was pitched by Justin Verlander, "I literally love Justin Verlander".  Well, I along with all of Houston proudly say, "We literally love Jose Altuve".

My wonderful wife hearing me practicing this song said, "Oh, no, you are ruining one of my favorite songs."  :-)      Have no fear, a second opinion by the Tales law firm - Dewey, Cheatem, and Howe - thinks this is one of the Tales best efforts.  Hmm, now that I think about it, there wasn't a very high bar for me to clear.

So, without further ado, my tribute to Jose Altuve, sung to the karaoke music from Daniel Boone,

Jose Altuve Is A Big Man:

Congratulations and Thank You, Jose Altuve, a big man!

UPDATE:  October 19, 2019:  Jose Altuve hit a walk off 2 run Home Run to win Game 6 a d the American League Championship Series!   The big man does it again getting the hit that brings the Astros the 2019 American League pennant and a date in the World Series again!