Being from Houston, Texas we are very proud of the Bush family. Not just the former presidents and their wives, but the entire family, all class acts.

Today, Jan. 18, 2017, both former president George W. Bush and former first lady, Barbara Bush, had to go to Houston's Methodist hospital.  President Bush is in intensive care due to pneumonia and his wife Barbara suffered from exhaustion.

As we give our prayers, we wish both a very speedy and full recovery. God Bless them.

Nothing more shows what a class act the former president is then the letter he sent to Donald Trump just a couple of days ago. [and he did this in spite of Trump's demeaning  comments he made about Bush's son, President George W. Bush, during the primary campaign.]

The following from this great article in Red State: "A Class Act: Read George H.W. Bush's Letter To Donald Trump"

"Since Trump’s win in November, the elder Bush has shown, as ever, how Americans should act when faced with defeat: with grace, dignity and a little bit of self-effacing humor.

His letter of regret to Donald Trump on missing his inauguration is a perfect example of that." 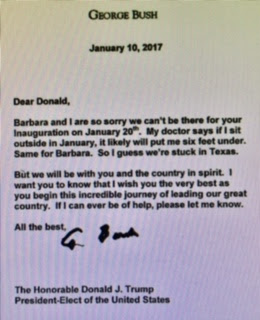 It reads:
Dear Donald
Barbara and I are so sorry we can’t be there for your Inauguration on January 20th. My doctor says if I sit outside in January, it likely will put me six feet under. Same with Barbara. So I guess we’re stuck in Texas.
But we will be with you and the country in spirit. I want you to know that I wish you the very best as you begin this incredible journey of leading our great country. If I can ever be of help, please let me know.

How do you spell class?  Try President George Bush.

Email ThisBlogThis!Share to TwitterShare to FacebookShare to Pinterest
Labels: Family