It is said that one of the best hires by president-elect Donald Trump was when he made pollster and Republican strategist Kellyanne Conway his campaign manager to help him win the upset 2016 presidential election.  I agree, she did a great job.


It has not been confirmed [in fact the Trump campaign has denied this] but it is believed that Kellyanne took Trump's I-phone and laptop computer away from him near the end of the campaign to keep him from making any unforced stupid tweet errors.
Well, whether she took those away or not, the Tales has exclusive proof that the president-elect has gotten his laptop back since he won the election.  And to keep up his disciplined non-tweeting routine that he had established the last two weeks of the campaign, we have learned that Mr. Trump did not go immediately to twitter to tweet something.  He went to google first.


Check it out for yourself: 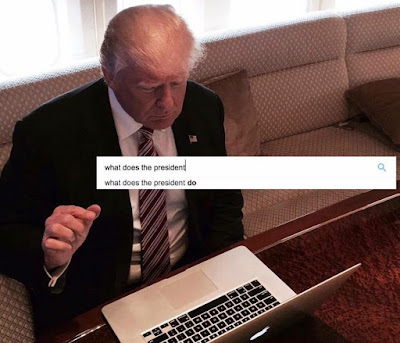