Hat tip:  thanks to my patriot brother Sandy from one of his golfing buddies. Tales added a few edits.  :-)

While I am sure you all know about Obamacare - The "Affordable" Health Care Act of 2010, I bet many of you didn't know about the Affordable Plumbing Act of 2010. 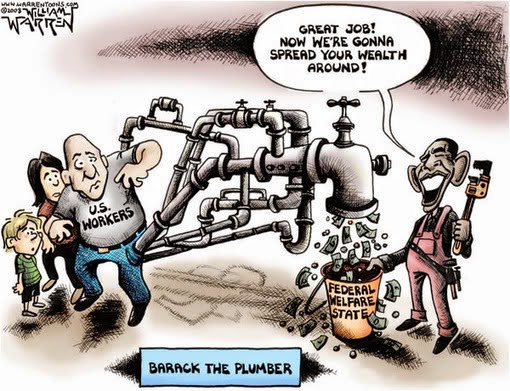 Only weeks after leaving office on January 20, 2017, former President Barack Obama discovers a leak under his sink, so he calls Troy the Plumber to come out and fix it.
Troy drives to President Obama's new house, which is located in a very exclusive, gated community near Chicago where all the residents have a net income of way more than $250,000 per year.

Troy arrives and takes his tools into the house.  He is led to the guest bathroom that contains the leaky pipe under the sink.  Troy assesses the problem and tells President Obama that it's an easy repair that will take less than 10 minutes.  President Obama asks Troy how much it will cost.  Troy checks his rate chart and says, "$9,500."

Troy says, "Yes, but what I do is charge those who make more than $250,000 per year a much higher amount so I can fix the plumbing of poorer people for free.  This has always been my philosophy.  As a matter of fact, I lobbied the Democrat Congress, who passed this philosophy into law. Now all plumbers must do business this way.  It's known as the 'Affordable Plumbing Act of 2010'.  I'm surprised you haven't heard of it."

"You see Mr. President, unlike that greedy Joe the plumber who thinks he built his own business and who gave you such a hard time, I realize it is the government who makes us wealthy."

In spite of that, Obama tells Troy there's no way he's paying that much for a small plumbing repair, so Troy leaves.  Obama spends the next hour flipping through the phone book calling for another plumber, but he finds that all other plumbing businesses in the area have gone out of business.  Not wanting to pay Troy's price, Obama does nothing and the leak goes un-repaired for several more days.  A week later the leak is so bad President Obama has had to put a bucket under the sink.

Michelle is not happy as she has Oprah and guests arriving the next morning.  The bucket fills up quickly and has to be emptied every hour, and there's a risk the room will flood, so Obama calls Troy and pleads with him to return.

Troy goes back to President Obama's house, looks at the leaky pipe, checks his new rate chart and says, "Let's see, this will now cost you $21,000."

President Obama quickly fires back, "What? A few days ago you told me it would cost $9,500!"

Troy explains, "Well, because of the 'Affordable Plumbing Act,' a lot of wealthier people are learning how to maintain and take care of their own plumbing, so there are fewer payers in the plumbing exchanges.  As a result, the price I have to charge wealthy people, like you, keeps rising.  Not only that, but for some reason the demand for plumbing work by those who get it for free has skyrocketed!  There's a long waiting list of those who need repairs, but the amount we get doesn't cover our costs, especially paperwork and record-keeping.

This unfortunately has put a lot of my fellow plumbers out of business, they're not being replaced, and nobody is going into the plumbing business because they know they can't make any money at it.  I'm hurting too, all thanks to greedy rich people like you who won't pay their ‘fair share'.

"You mean I wouldn't have to pay anything to have you fix my plumbing problem?" asks Obama.

"Well, not exactly," replies Troy. "You would have had to buy the insurance before the deadline, which has passed now.  And, because you're rich, you would have had to pay $34,000 in premiums, which would have given you a 'silver' plan, and then, since this would have been your first repair, you would have to pay up to the $21,000 deductible, and anything over that would have a $7,500 co-pay, and then there's the mandatory maintenance program, which is covered up to 17.5%, so there are some costs involved.  Nothing is for free."

With a bland look, Troy replies, "Well, paperwork, mostly, like I said.  And the internal cost of the program itself.  You don't think a program of this complexity and scope can run itself, do you?  Besides, there are millions of folks with lower incomes than you, even many in the 'middle class', who qualify for subsidies that people like you must support.  That's why they call it the 'Affordable Plumbing Act'!  Only people who don't make much money can afford it.  If you want affordable plumbing, you'll have to give away most of what you have accumulated and cut your and Michelle's income by about 90%.  Then you can qualify to get your 'Fair Share' instead of giving it."

"But who would pass a crazy act like the 'Affordable Plumbing Act'?!" exclaims the exasperated Obama.

Brilliant👍. Wishing it really was not so simple to
#WakeUpAmerica. Freedom quickly slipping away as our Constitution gets chizeled away 🇺🇸
Great piece Mr B.

Thanks so much Krissy!! Blessings from H-Town and a good Monday morning Glory to you!

Very informative article, Which you have shared here about the Plumbing Act. After reading your article I got very much information and it is very useful for us. Thank you so much. Plumbing businesses for sale online