This post was first published in 2014
In Houston there is this local sports radio show on @SportsRadio610 called Mad Radio with Mike Meltser and Seth Payne.  They were discussing personal remembrances of Monday Night Football games and that brought to my mind of one of the greatest, if not the greatest Monday Night Football game that I had attended.  I then began thinking of how lucky I was to be there and it brought to my mind two other great sports events that occurred in Houston that I was also blessed to attend.

These three sporting events were not only three of the top sporting moments ever, they were all sport changing events and they all happened in the Houston Astrodome and I was there at all three of them. 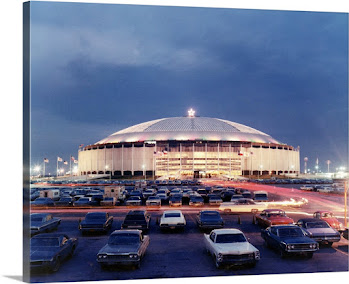 This is one of my favorite moments because I remember being there with my Mom and Dad and I remember how my Mom, Reenie, was so excited to see Billie Jean King win.  Bobby Riggs was a retired professional tennis player who was also a showman, and in a friendly way would try to put down women's tennis saying even at his age, he would easily defeat any woman professional tennis player.  Billy Jean King took him up on it and the widely viewed exhibition took place in a packed Houston's Astrodome and a huge television audience.  Before this event, women's tennis took a clear secondary role to men's tennis [in importance and in monetary earnings].  This one event, in which Billie Jean King won, was one of the factors that helped change that disparity forever, and brought women's professional tennis into greater prominence.

I attended this game with my Pop and brothers, another wonderful moment to remember.  Monday Night football was big when it first started, but this game really increased its popularity and TV viewing audience exponentially.   Howard Cosell, one of the Monday Night Football announcers at the time would call this the best Monday Night Football game ever.  This was a game between one of the top NFL teams, the Miami Dolphins coached by the legendary Don Shula and QB by Bob Griese, and an up and coming young Oiler team coached by the loved charismatic "cowboy", coach Bum Phillips.  This was the rookie year of the great running back Earl Campbell.  He would become so important to the Oilers success, the team was called lovingly by the fans, the Earlers.  Bum wore his usual blue cowboy hat and boots [that many of the fans also adopted], and the fans were all given light blue pom poms to wave during the game.  That made for a spectacular TV scene and the reason this was called "The Luv You Blue" game.   From that point forward these Oilers were called the luv you blue Oilers.  Earl Campbell would get 4 touchdowns, including a stirring 80 yard run to help the Oilers win 35-30.

This game featured the number one and two rated teams in the NCAA.  The number one ranked team and defending national champion, UCLA Bruins with Lou Alcindor [later to become Kareem Abdul Jabbar] vs. the number two ranked [and also undefeated] team, the University of Houston Cougars. [my team] with the Big E, Elvin Hayes.  UCLA had a long winning streak for its second straight year and this team coached by the legendary John Wooden, was considered by many sports pundits, as unbeatable.  The University of Houston Cougars were coached by the great Guy V. Lewis.


What a blessing to have been at all three of those sport changing events and made even greater so because I was with my Mom and Pop in one of the events and with my Pop and brothers in the other two.  Those great remembrances with my family make my heart warm with thankfulness.  Love you Mom and Pop as you are in my heart forever.

One of the sporting events to change sports history as we know it was with the Houston Oilers as well.

The 1979 WFC Championship game with Pastorini throwing the TD pass to Mike Renfro. Called OB and not awarded. This play alone was the instigator for the INSTANT REPLAY in the NFL. It wasn’t in Houston – but it was a big change in sports.

Thanks Stephen! Great one- it did have Houston connection too! Wow- Houston important in big sports events/changes.

There is NOTHING like sports to create remarkable memories ( some happy some not!) --- And to create those with family is so special. Those whom don't enjoy sports or choose not to, miss out on such a great opportunity to bond and create those special moments.

And I remember some of my best with you brother. You made them special!