Coincidental Back To Back Tweets?

What is great about twitter is that it not only is a social media platform, it is a great venue for information and breaking news.  It is also a venue for funny tweets and satirical tweets and serious tweets and religious tweets, etc.

What is neat is sometimes you get a situation like I got on Friday afternoon of back to back tweets that, while sent by different people, with different tweets, the main themes of the tweets amazingly coincided with each other.  One was a satirical cartoon, and the other was a link to a serious [and disturbing] story in Politico.

I first got this tweet of this political cartoon [from alltherightsnark.org] that, while meaning to be satirical and funny was actually not that far off base in my mind. 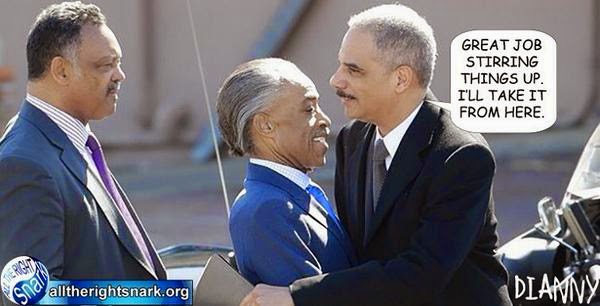 Then the very next tweet I received was from someone else which contained this link from Politico that amazingly verified the meaning implied by the cartoon that was just sent.

It was called "Revved Up by Glenn Thrush"   "How Al Sharpton became Obama's go-to man on race.

The article starts out: "A few days after 18-year-old Mike Brown was gunned down in Ferguson, Missouri, White House officials enlisted an unusual source for on-the-ground intelligence amid the chaos and tear gas: the Rev. Al Sharpton, a fiery activist who became a household name by provoking rather than pacifying."

Later in the article in Politico it says, "In Ferguson, Sharpton established himself as a de facto contact and conduit for a jittery White House seeking to negotiate a middle ground between meddling and disengagement. “There’s a trust factor with The Rev from the Oval Office on down,” a White House official familiar with their dealings told me."

You can read the entire article in Politico by Glenn Thrush by clicking here.

So, it turns out that cartoon in the first tweet, while trying to be funny, may have been very prescient as shown by the second tweet I received immediately after that.