Pray For Three Teens Kidnapped In Israel By PA Terrorists

This post was first published on June 16 - Please scroll down to the update on June 19.

With all that the turmoil that is going on in the world, you may have missed this disturbing news from Israel. Three religious Jewish teenagers in Israel were kidnapped on their way home from yeshiva last Thursday night, June 12. 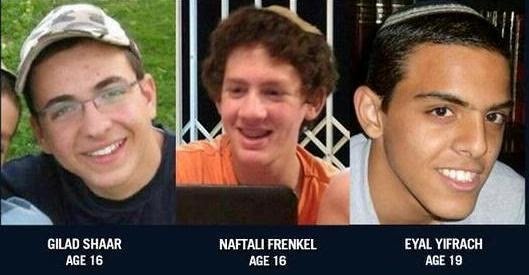 From Fox News: JERUSALEM –  "A terror group abducted the three teens missing from the West Bank, Israel's prime minister said Saturday, as soldiers combed the rocky terrain and searched homes to try and find them.  Prime Minister Benjamin Netanyahu again blamed the Palestinian Authority for the Thursday night disappearance of the teens, one of them a U.S. citizen."

From Aish.com: " Three yeshiva students had been kidnapped on Thursday night by Arab terrorists. Naftali Frankel, 16, Gilad Shaar, 16, and Eyal Yifrach, 19, were studying in their yeshiva in Gush Etzion, an area of Jewish towns and Arab villages south of Jerusalem.  Naftali Frankel is the U.S. citizen, mentioned earlier.  "Our children were kidnapped by a terror group," he [the Prime Minister] said. "There is no doubt about that."

Continuing from Aish.com, Prime Minister Benjamin Netanyahu said:  "We are in the midst of a widespread operation to locate and bring back the three young yeshiva students. I spoke with their parents, and I told them that we are doing everything possible and more to bring back their boys, who are also our children."

"Prime Minister Netanyahu informed U.S. Ambassador to Israel Dan Shapiro that one of the abducted boys is an American citizen."

From the Jerusalem Post: "Widespread manhunts were continuing in full force for the three Israeli teenagers who went missing on Thursday night, IDF spokesman Moti Almoz said on Sunday evening.  "We are operating in large volumes in order to be successful. During the past day we extended the operations and arrested dozens of Hamas members," he said in a short address to the press. "We will continue to operate in the entire territory, we will spare no effort as our aim is to return the boys."

Here is the audio of that call by Yoni to Hugh, via a podcast from The Hughniverse, that I suggest everyone interested in intelligent conservative talk radio subscribe to.