A lot of pundits are admitting that the GOP has a good opportunity to win the US Senate in 2014, but most pundits then say it will be a different story [it will be very tough for the GOP] in the presidential election of 2016.

I want to submit a theory that postulates that if the GOP can maintain control of the House and take over the Senate in 2014, that will strongly aid [and in my opinion almost ensure] the GOP presidential nominee winning the election [i.e., presidency] in 2016.

There is one caveat.  This theory only is valid if Obamacare remains unpopular with the American people.  Of course, if in the unlikely situation Obamacare does a turn around and the majority of people think it is working to lower costs and they are getting good health care with good insurance coverage and it moves into popular territory, it won't matter what happens in 2014 because then the Democrats would be big favorites to win the presidency.  Barring that, I am convinced that the GOP winning in 2014 will propel them to the White House in 2016.

Here is why.  With the GOP in control of both the House and the Senate, when the House sends over to the Senate a bill repealing Obamacare or some replacement bill that would in effect repeal Obamacare [as they have done many times with this Democrat led Senate] there will be no Majority Leader Harry Reid to block that bill from getting a hearing in the senate.  Then the GOP led Senate, if they all stick together can vote in favor of that bill. 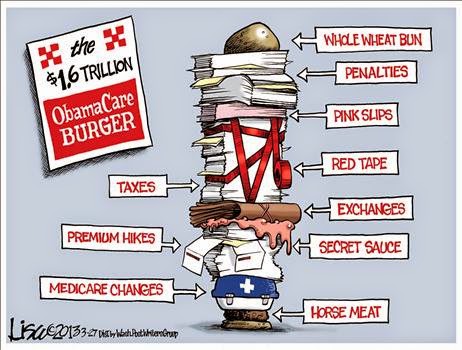 The GOP can send over many bills to the White House that will virtually render Obamacare dead in the two years leading up to the election.  It is almost certain that the president will veto all of them. While the main stream media has been able to provide cover for the president with this divided House and Senate [for ex., covering up bills that the GOP house has sent to the senate], they won't be able to hide a presidential veto or vetoes.  That will be all over the news.

So, even though there almost surely won't be enough votes to over-ride a president's veto, that won't matter because a presidential veto of a GOP bill altering Obamacare will secure Obamacare as the number one issue for 2016.  A vote for the Republican candidate will mean repealing and replacing Obamacare while a vote for the Democrat candidate will mean the unpopular Obamacare is here to stay forever.  That will be the issue, the winning issue for the GOP nominee to ride all the way to the White House.

But my winning the White House scenario theory all begins with winning the senate in 2014.  If we [the GOP] cannot win the senate in 2014 with all of the unfavorable political conditions the Democrats will be facing in November, then it is all moot as this country will be on a continued downhill slide with unfortunately no end in sight, as the Democrats will then almost assuredly win the White House in 2016.


The probability of my theory will rise to an even higher level if the grandmother of Obamacare, Hillary Clinton, is the Democrat nominee.