Now They Tell Us 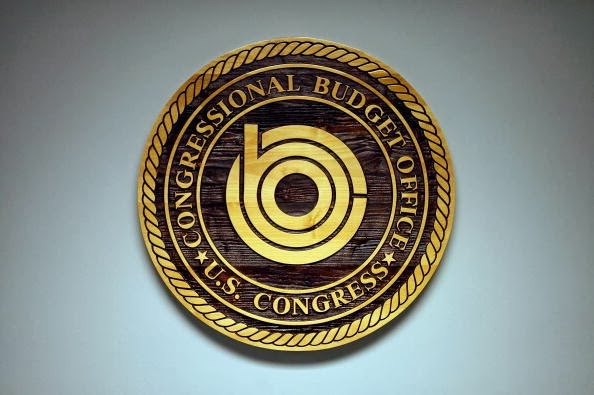 Well this just out [Tuesday Feb. 4] from the CBO [Congressional Budget Office] as stated in the Washington Times: "Obamacare will push the equivalent of about 2 million workers out of the labor market by 2017 as employees decide either to work fewer hours or drop out altogether, according to the latest estimates Tuesday from the Congressional Budget Office."  Also the CBO states in the article, trying to put a positive spin on the situation, "But over the long run, Obamacare will eventually catch up and by 2020 only about 30 million people will be without insurance coverage — down from 45 million this year".


Look at both of those claims...1. millions more will be out of the already record breaking low labor force participation rate and or many Americans will have their work hours shortened and 2. there will still be 30 million Americans without health insurance.  Both of those statistics are what conservatives and Republicans have been saying from the get go.


So, now they tell us.  The CBO now tells us this after it is too late.  Their wildly optimistic projections before the law was passed [by only Democrats] helped the Obamacare law barely pass in the congress. So, thanks a hell of a lot CBO.

In December of 2013 I did this post I called 'Insanity'.  With this CBO report confirming more bad news about Obamacare and its deleterious effects on a majority of Americans, that post is even more relevant today.

The following are some excerpts from 'Insanity?':

Okay so what about health insurance coverage for all Americans? Even using the governments own measure through the non partisan CBO [congressional budget office] we have this via CNS News: "A new Congressional Budget Office (CBO) report says that under the Affordable Care Act, a.k.a. Obamacare, 30 million non-elderly Americans will remain without health insurance in 2022.  One of the main arguments the Obama administration made for passing the Affordable Care Act was that it would provide coverage for the uninsured".
Think about that.  The CBO only uses the optimistic figures given to it by the proponents of the bill [the Obama administration] and it says a decade from now there will still be 30 million uninsured Americans.

What about the costs of Americans health insurance?
This from Hot Air:  "In California, Aetna is proposing rate increases of as much as 22 percent, Anthem Blue Cross 26 percent and Blue Shield of California 20 percent for some of those policy holders, according to the insurers’ filings with the state for 2013... In other states, like Florida and Ohio, insurers have been able to raise rates by at least 20 percent for some policy holders. The rate increases can amount to several hundred dollars a month".

This from Heritage:  "Individuals in most states will end up spending more on the exchanges. It is true that in some states, the experience could be the opposite. This is because those states had already over-regulated insurance markets that led to sharply higher premiums through adverse selection, as is the case of New York. Many states, however, double or nearly triple premiums for young adults. Arizona, Arkansas, Georgia, Kansas, and Vermont see some of the largest increases in premium."

This from Forbes: "Furious lobbying by every healthcare group, from acupuncturists to chiropractors to fertility specialists, all of whom want to make sure that coverage of their services is required for all policies issued in the state. The more coverage mandates there are, the higher premiums rise. Indeed, benefit mandates can add as much as 50 percent to the cost of insurance... In other words, health insurance costs are going up. And for that, you can thank Obamacare".

I submit, if Obamacare cannot achieve at least one of the goals it was established for, then there is no justifiable reason to continue putting the federal government in charge of 1/6 of the economy with Obamacare.   Yes, making sure that people with pre-existing health conditions have access to health insurance is a good thing, but that surely can be done without changing the entire health care system that hurts people without pre-existing conditions.

Albert Einstein said the definition of insanity is doing the same thing over and over again but expecting a different result.  Could he have added that continuing to do something for a desired result that has no chance of occurring also be insanity?

Higher costs, job losses, 30 million still will be uninsured, debt skyrocketing, government in control of 1/6 of the economy, government regulations on a health care system hundreds of millions of Americans don't want the government involved in.

So, my question is, why are we continuing this insanity?

1) My understanding is that CBO is only addressing people, like me, who voluntarily retire early - or reduce hours - and presumably become less productive. I'm not sure I understand this since, generally, Obamacare costs appear to be higher. And covering healthcare isn't the only reason for working.

2) My understanding is the CBO does not include people who involuntarily are shifted to part time or otherwise have hours reduced. Or people who are not hired at all due to employer efforts to control employee costs.

3) I'd hesitate to call CBO, "non-partisan". It may be less partisan than "DOJ's Civil Rights Division. But there is a considerable gap between that and non-partisan. I regard this report as "best case".

Good points DB, TY!---I think they were also talking about lower income workers who would voluntarily leave a job [or have their hours reduced] with 40 hours to either not work or go to a job with 25 hours/week, and then be afforded a subsidy from Obamacare...it is a disincentive for lower income workers to work as much. And that is crazy-but that's what they are promoting..and leftists are actually touting that as a good thing [like the NY Times] --Everything this administration is doing is incentivizing less work so more and more people will be dependent on the government.... this is not good.