The vile bigoted congressman Alan Grayson, D-FL, has just launched some more of his hate speech.

This from the Weekly Standard: " Democratic congressman Alan Grayson of Florida used an image of a burning cross to spell "Tea Party" in a recent fundraising email."

This is the hateful image this despicable man used: 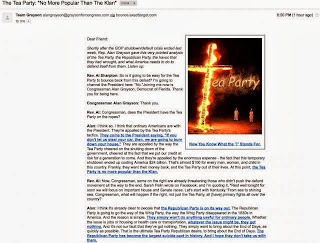 Lt. Col. Allen West, a black man and former tea party congressman from Florida, asked on the Megyn Kelly show on the Fox News Channel, "where is the Congressional Black Caucus, where is the NAACP, where is President Obama?"  The Lt. Col. said he remembers being brought up in Georgia with horrifying images of  the burning cross from the hate mongering bigoted KKK group [in which history will show at that time it was composed mostly of Democrats] and it is so disgraceful for Grayson to link that image to the group he belongs.  It is not only hate speech by Representative Grayson, it diminishes the horrible experience that African Americans faced from the Ku Klux Klan.

Being Jewish, I ask another question.  Where are you ADL?  [the Anti Defamation League]
This from their own web site on the purpose of the ADL:  "The Anti-Defamation League was founded in 1913 "to stop the defamation of the Jewish people and to secure justice and fair treatment to all." Now the nation's premier civil rights/human relations agency, ADL fights anti-Semitism and all forms of bigotry, defends democratic ideals and protects civil rights for all".

I ask you ADL, is there any greater form of bigotry shown against fellow human beings as Alan Grayson has shown to members of the tea party [people like Lt. Col. Allen West and Senator Marco Rubio and millions of patriotic Americans of all races that comprise the tea party] then to equate those Americans to the evil Ku Klux Klan?

The ADL has been a great iconic organization fighting not just anti-Semitism but all forms of discrimination since their inception, but in recent years has seemed to have ignored a lot of hate speech that has come from the left [aimed at conservatives and Republicans].