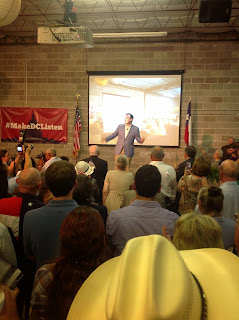 There was some great excitement in Houston, Texas Monday night as Senator Ted "Mr. Smith" Cruz came back home to a warm welcome from the grass roots hosted by the King Street Patriots.  The fetching Mrs. B and I were in the diverse crowd [sorry liberal main stream media, this was not an all white crowd] welcoming Texas hero Senator Cruz back home to Houston.  The King Street Patriot site was packed to the brim.  As we walked in the building we saw on the big screen an appropriate playing of the movie, Mr. Smith Goes To Washington.  Ted Cruz is indeed Mr. Smith goes to Washington  as he has annoyed the establishment DC crowd by actually doing what he promised the people he would do.  He is fighting for the people willing to take the slings and arrows of not just the Democrats but many of his own party.  His over 21 hour marathon speech [non filibuster-filibuster] was indeed symbolic of Jimmy Stewart's filibuster in the block buster movie.

Catherine Engelbrecht, head of the King Street Patriots and "True the vote" gave an inspiring introduction to the event.  She told us how at the end of Senator Cruz' speech she would present him with the book "War and Peace" for reading material during the next filibuster.

The audience gave a rousing welcome to the great patriot, Rafael Cruz, Ted Cruz father, as he led us in prayer and the pledge of allegiance.  Local radio host Michael Berry announced the entrance of Ted Cruz with his wife and daughters and the room exploded in applause of love. We came here to show our thanks to Senator Cruz, but in much of his speech he gave thanks to us.

Here are a few pictures and partial videos of the evening.  I am sorry about for not the best view of Senator Cruz in the videos, but there were a lot of tall people who happened to be in front of me [either that or they weren't tall but I am short.]  :-)

Senator Ted Cruz glad to be back in America errr Texas:


Senator Ted Cruz on who he works for:

ThankYou so much Mr. B for posting the event that took place in Houston last night. I almost feel like the creepy Chris Mathews in sayin: "What a thrill...blah blah blah" LOL Just Kiddin. As Conservatives we don't do the idol worship thing. But I thankyou for writing about your experience, as the lamestream dopes sure do their best in trying to tear down what's good for the country.
What a great blog you have. And I will continue to pay attention even though the current occupier of the WH has instructed NOT to. #JustSayin

Wow, thank you so much for the comment about my blog. I really appreciate it Just sayin!! God Bless.

He is amazing. I can only say that I'm lucky to have Rand Paul here in Kentucky, home of the most bland jelly ever!

You wouldn't be talking about somebody named Mitch would you Mr Bass? :-))))
Thanks MB from MB.