In Classical Music, This Joke is No Joke

These movements will be described usually by the tempo of the movement.  You might see for example Symphony #1 in D major, movement #1, allegro. Of course, that means the composers 1st movement of his 1st symphony will be played fast.

Scherzo literally means to jest or joke.   Scherzos in a musical composition or movement usually have a light, fast-moving, and playful character.  A scherzo usually will be the second or third movement of a symphony.  Some scherzos actually bring a smile to your face, like the third movement of Beethoven's Violin Sonata known as the Spring Sonata, which we feature here.

In Beethoven's Spring Sonata, the scherzo is the short third movement. You can see the playful nature of the pianist and violinist and the "joke" of how the instruments don't seem to be playing together [on purpose].  When watching this movement there is no doubt why this movement is scored scherzo.

Then a more vigorous and dramatic scherzo comes from what many call the greatest symphony ever written, Beethoven's majestic Symphony #9, commonly known as the Ode To Joy, for it's glorious, hopeful final choral movement #4.  The Scherzo is the second movement of this masterpiece.  This dramatic scherzo, while having what could be described as a surprise ending, is definitely no joke.

As always, friends, I ask that you please turn up the volume and enjoy these two scherzos by the master Beethoven, which are no joke.  And then enjoy a bonus third scherzo from the master, Beethoven's scherzo movement in his Eroica Symphony.


For a bonus Scherzo, added since I first published this post, this wonderful scherzo for violin and piano by Johannes Brahms: 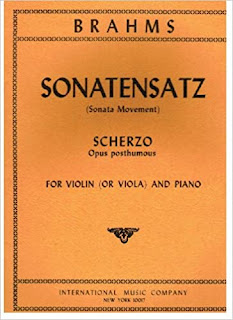 Thanks so much Peter! God bless!!