This tales quip of the week comes from the great federal prosecutor Andrew C McCarthy who prosecuted successfully the blind cleric Omar Abdel-Rahman and the rest of the terrorists in the first attack on the Twin towers in New York.   He was on Hugh Hewitt's radio show on Wednesday May 1, 2013 and Hugh told him he was going to play an audio of the president's response to Syria having used chemical weapons. You will hear the president putting all kinds of contingencies on the red line he first established, making it almost impossible for Assad to cross.

Here is that video:

That very weak hemming and hawing by President Obama led Andrew C McCarthy to respond with what Tales deems to be the Tales quip of the week:

Andrew C McCarthy:  "It sounds like Assad's got a good defense lawyer." 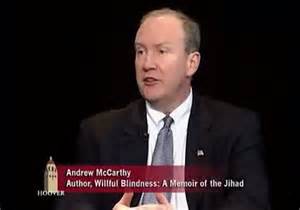