Thanks to my twitter tribble friend Cathy of Colorado @photog357 for reminding me today is the Holocaust Remembrance Day in Israel. 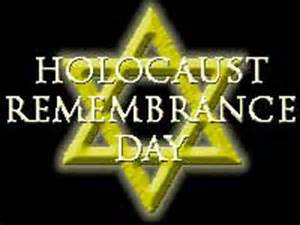 From The Huffington Post:
JERUSALEM —"Israel dedicated its annual memorial day for the 6 million Jews killed in the Holocaust to mark 70 years to the Warsaw ghetto uprising, a symbol of Jewish resistance against the Nazis in World War II that resonates deeply in Israel to this day.
At the opening ceremony at nightfall, President Shimon Peres and Prime Minister Benjamin Netanyahu both linked the desperate Jewish revolt of 1943 to the warrior mentality that enabled the establishment of Israel five years later.
"There was a never a rebellion like it. They were so few and their bravery remained as a model for so many," Peres said at Yad Vashem, Israel's official Holocaust memorial, before hundreds of Holocaust survivors and their families, Israeli leaders, diplomats and others."

"The annual remembrance is one of the most solemn on Israel's calendar. Restaurants, cafes and places of entertainment shut down, and radio and TV programming were dedicated almost exclusively to documentaries about the Holocaust, interviews with survivors and somber music. The Israeli flag flew at half-staff.
In parliament, Peres recited the names of his family members killed along with 2,060 members of their community in August 1942 in the town of Vishneva, part of Poland before World War II and now in Belarus. Peres, 89, was already in Israel.
Nazis and their local collaborators rounded up the Jews and herded them into a wooden synagogue. Peres said his grandfather, a prominent rabbi, wrapped in a prayer shawl, walked at the head of the community into the building. The Nazis then shot at the structure and set it on fire, burning the people inside to death.
This year's commemoration marked 70 years since the Warsaw ghetto uprising, a symbol of Jewish resistance against the Nazis that resonates deeply in Israel to this day."
"A wreath laying ceremony at Yad Vashem followed, with Israeli leaders, Holocaust survivors and visiting U.S. Secretary of State John Kerry in attendance."

Not just in Israel but all across the United States this week has commemorations to remember those murdered in the Holocaust.

From the Examiner:
"Holocaust Remembrance Day ("Yom Hashoah") is today, and commemorations continue all week, as established by the law that also created the United States Holocaust Memorial Museum, which is celebrating its 20th anniversary. This year's remembrance theme is "Never Again: Heeding the Warning Signs"."

May God Bless Israel and all the people of Israel on this remembrance day.

Email ThisBlogThis!Share to TwitterShare to FacebookShare to Pinterest
Labels: Israel