The Emperor Studies Hoops While His Empire Goes Bankrupt 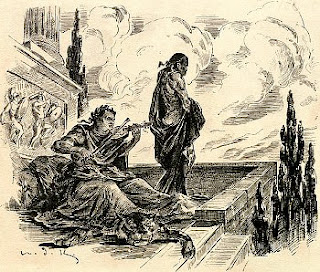 In fact, president Obama has yet to get his budget requests to the congress in time in all the years he has been president.  But the same president has never failed to get  his NCAA brackets in plenty of time to be on ESPN.   Talk about priorities.  It's hoops and party time at White House before doing the job the people hired the president to do.

In the past it didn't seem to be that big a deal.  But it is truly amazing in a period of time when the president himself has said sequester cuts will cause economic hardships upon the people of this country, in a period of time when White House tours for the American people have been canceled [supposedly because of the dire consequences of the sequester], in a period of time the president has supposedly been so busy that he hasn't had time to turn in a budget to the congress, this president amazingly felt no guilt in filling out basketball brackets.  Amazing is one word that comes to mind.   Shameful is another word.

I guess to this president, filling out a budget is above his pay-grade.  Filling out the NCAA basketball bracket gets him on TV and he is able to continue what I guess he thinks is his real job of campaigning to get those approval ratings up.

Laura Ingraham has written a book called "Shut up and sing" aimed at the entertainers who interrupt their performance with political comments. Someone should write a new book for president Obama.  'Stop the campaigning and do your job'.  It's a book that if written in 2009 would have needed no revision for the the two terms of the Obama administration.