I was sad to hear on Saturday night of the passing of one of the greatest baseball players of all time, Hall of Famer Stan Musial, of the St. Louis Cardinals. His nickname was The Man. He was given that name because of what he could do on a baseball field, but he could have been given that name if he never played a day of baseball.   He is truly one of the kindest giving gentlemen the world of sports has been lucky to have had. He is truly beloved in St. Louis for the loyalty and charitable giving he showed to the city he played his entire career in.  Yes, he was Stan the Man.  He could also rightly have been called Stan the Gentleman. 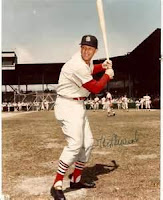 A great human being, ambassador of the game when it was respected as fair, there wil never be another like him