To Light A Candle

For my family this weekend will be a special one too.  On Saturday, December 8 we will be celebrating the first night of Chanukah, "The Festival of Lights", with all Jews around the world, by lighting the first candle of the menorah. Chanukah commemorates the rededication of the Jerusalem Temple at the time of the Maccabees's victory. Chanukah lasts for eight days in celebrating the miracle of oil that burned for eight days [from enough oil to burn for only one day]. Each day of Chanukah another candle is burned.

Note:  While you see two candles burning, the middle candle, called the shamash, is the lighter candle that is there to light the other candles that are added each night.
________________________________________________________________________________
On this Sunday, my two brothers Sandy and Brad and my sister Susan [who has just been blessed as a new grandmother as her daughter Angie gave birth on Thursday] and I will be lighting a different candle. We will light what is called the Yahrzeit candle [that stays lit for 24 hours].   We will light that candle for our wonderful father, Pop, who passed away five years ago on December 9, 2007.  In that December in 2007 while Pop was in the hospital it was also during Chanukah. I remember the young children of the family making a picture of a menorah and tape it to Pop's door at the hospital. Each new day we would draw a new candle on the menorah.  Another connection to Chanukah [and it's commemoration of  a miracle], was that I believe a miracle happened with Pop. As he was getting weaker and barely could speak a word, the rabbi came into the hospital room to pray for Pop and recite Pop's favorite Jewish prayer, The Shemah [Shemah Yisrael].  As the rabbi was saying the Shemah, Pop in a clearly audible voice recited the whole prayer in Hebrew.  You can imagine the tears in the eyes of everyone in the family when he did that. We knew that God was with us at that time.

How the time has flown, it seems like it was only yesterday when we lost our Pop. I know I speak for my brothers and sister that our love and remembrance of Pop is never ending. Pop is still our role model for us today that we try to honor in every day we live our lives.  He was truly a great, great man. We love you and will never forget you Pop! 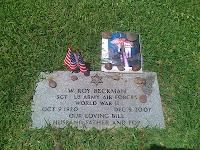 Email ThisBlogThis!Share to TwitterShare to FacebookShare to Pinterest
Labels: Religion

Beautiful, awesome words honoring a true man, a true father , a true husband that lived a truly wholesome life dedicated to respecting all human beings!
Only a man with such a great pop could write such beautiful words as big mike has written here! Happy holidays to all tribbles!

Thanks brother for you awesome words and for greeting the tribbles. :-))

Mike - amazing words my awesome uncle. thank you! I am blessed with the most amazing wife, Leslie, whom I love the way Pop loved Reenie. True Role Models!

Thank you so much for those awesome words nephew. Reenie and Pop were and would still be so proud of you Stephen for the life of integrity you have liven. You and Leslie's love for each other exemplifies Pops love for Reenie. God bless you and Leslie, Stephen.

Michael, I love reading your blog!! Thx for sending this one to me!! Excellent!! Happy Chanukah, my friend, so well-done!!

Thank you patriot. And a Merry, Blessed Christmas to you my friend.

What a beautiful tribute to our dad. We are so very proud of you, and I know that our dad is very proud of everything you are doing. How lucky everyone is who knew Reenie and Pop to have experienced our unbelievable parents, and how fortunate we all are to have a family as great as ours. Thanks Mike for always explaining so beautifully everything we want to say.

Wow, thanks for those beautiful comments Susan! They mean so much to me. And congratulations in your beautiful new grand baby Lola!!! What a wonderful blessing for Angie, David and Grammy. :-)))

They are the lazy mans fire maker. Not that everyone who uses them are lazy! They are just consistently very easy to use. Press a button and you have fire! I would wager that most campfires and BBQ grills in the US are started with a lighter. Candle Lighter