While this is just a small anecdote, it sure gave me encouragement.  In Houston, we have this wonderful Jewish Bakery called Three Brothers. I was in there a couple of days ago and to my surprise these delicious looking cookies caught my eye.  They had a picture on them. One set had Obama 2012 with Obama's pic; and the other set had Romney 2012 with Romney's pic. Wow, I told the young lady behind the counter... I'd like one of those Romney cookies.  She said, alright and gave me one.  Then I hadn't seen this but there was a board in the front and she put a mark on it with my selection.   They had a tally for who was buying the Romney or Obama cookies.   When I saw the tally, I was even more excited than seeing the Romney cookie.  At that time, a couple of days ago [so I don't know the present count], Romney had 55 marks to 48 for Obama.  That's a small sample, but that would have made it 53.4% to 46.6% in favor of Romney.

You might say, meaningless and how could I get excited over a cookie count? Remember, though, this was a Jewish Bakery and it was located in an area of town where I know a lot of Jewish people reside [like me]. So, I think I am safe in saying there are a lot, if not a majority of Jews who are customers of Three Brothers Bakery.   So, for Romney to be close, much less leading, was really encouraging to me.  Like I said I don't know what the count is now and don't want to misrepresent the great Three Brothers Bakery that everyone should visit when in Houston, but even if Obama has come closer or even taken the lead, the fact that Romney would be close in this unscientific poll put a big smile on my face.

I really feel now, not just because of this cookie poll, but from my sense of the feelings in the Jewish community, that Romney will be closer to Obama with the Jewish vote than even the polls are showing now.  If that 78-22% that Obama had over John McCain would go down to a 60-40% advantage for Obama, that would be huge. That would really make a difference in the key swing states of Florida and Ohio and could possibly be the difference in winning those states. 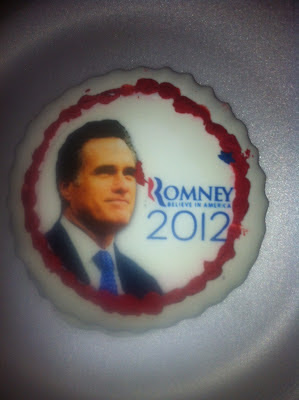 Cute! What a great story! :D Braeswood is near my old stomping ground!

love it--mike, after 5 days in jerusalem and tel aviv, and jaffa, i was sooo encouraged to hear that 85-90 percent of israelis STRONGLY support romney and are very worried about another obama presidency! These were stats repeated to me by 3 cabbies, 2 people whom live in israel after coming from us, 1 oil employee from us working in tel aviv,and many others! David horowitz from israeli times spoke to our group (hadassah) and said point blank he has no confidence in obama support of israel! keep up the good work, lets pray for november to bring change! shalom, from israel!
brad

Big Mike, thank you for covering this very important, sweet part of the election process. We're glad you enjoyed it and hope it created a sweet memory. Janice Jucker on behalf of Three Brothers Bakery

Thank you Janice!! It's an honor to have the owner of the Three Brothers Bakery comment on this blog.
Keep up the great work and the great food! Which reminds me, it's time to go to Three Brothers and get a dozen Kaiser rolls. :-))