There is a book that has just come out that all Americans should read before they vote in the presidential election in November.  It is also a book that all conservatives should read for great points to use in making the case against Obama with independent voters.

The book is by Hugh Hewitt, constitutional law professor and host of the [conservative, intelligent] Hugh Hewitt radio show.   "The Brief Against Obama" will be one of the more important works of the summer that will aid in leading to the so important defeat of Barack Obama in his quest for a second term. 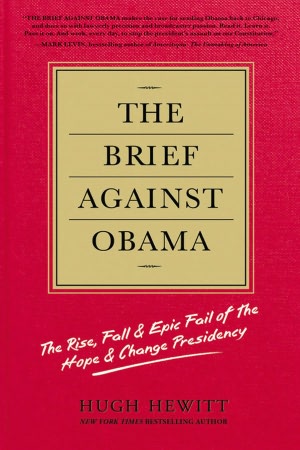 Everyone please go to the web site of the book:  The Brief Against Obama

The Brief Against Obama is available at the usual online sites of Amazon and Barnes and Noble and retail book stores.  It can also be downloaded by Amazon Kindle and I-books.

Thanks for spreading the word about The Brief Against Obama. This is a must-have tool for any common sense voter and I hope more people get this intellectual ammunition before November.