Many people were astonished to see the numbers from the Bureau of Labor statistics that came out Friday, showing that while only 115,000 jobs were created in April, the unemployment rate actually went down a tenth of percent to 8.1%.   In normal periods in American history, the unemployment rate would have either stayed the same or actually increased .1 or .2%.

The reason this unemployment rate is so artificial [and not representative of the actual pain that the American people are suffering] and the reason the rate went down is because so many Americans of working age have left the labor force. While it is true some Americans have left the labor force because of retirement, there are also many Americans who have become so discouraged in being able to find a job, they have stopped looking, and are thus not counted in the unemployment rate.

That is why, despite the ever self congratulatory Barack Obama's crowing about the dip in the unemployment rate [of 0.1%], this was not good economic news for the United States of America.  Of course, you have to wonder if Barack Obama actually cares about the economic conditions of Americans, or only about the conditions of his re-election chances.  The fact that so many people have given up looking for a job does not seem to phase "mister cool".  The fact that the unemployment rate went down to 8.1% was great news to him, because this is the only number most people will see [from the main stream media].

On ABC's This Week round table, on Sunday, George Will made this insightful comment. He said under this president, when the unemployment rate goes down, that is actually bad news for the economy [because you know the reason it went down is that so many Americans have given up looking for work].

Trust me, I was no fan of Bill Clinton as president. That being said, I have to admit that president Clinton was good of conveying to the American people that he "felt their pain." President Obama doesn't even give the pretense of feeling Americans pain.  When the economic numbers have been so dismal the last couple of months, instead of feeling our pain, this president wants us to feel his pain, because those numbers hurt his re-election chances.   Poor guy.


The chart  below helps to explain the artificial nature of the unemployment rate under Barack Obama, and the worrisome economic conditions Americans face today.  With the still very high unemployment rate of 8.1%, added to the record low Labor Force Participation Rate of 63.6% [over 88 million Americans not in the labor force], the picture is not as rosy as the Obama administration would have you believe. 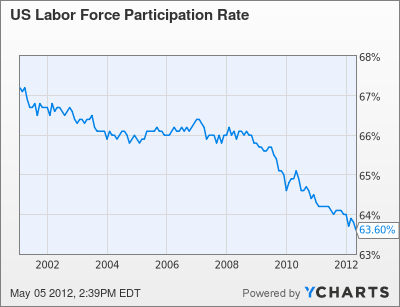 Email ThisBlogThis!Share to TwitterShare to FacebookShare to Pinterest
Labels: Economics

The only pain this president feels is that pain knowing he cannot stop even more oil exploration than he has, the pain of knowing there are successful wealthy businessman in this country and the pain of not being able to attend the anti- American anti- white church he went to for so many years!