This has to be the most worrisome poll of all for the O man.

Besides, all of the very troubling poll signs for Obama, like his falling to 38% job approval in the Gallup poll, his falling behind Romney and tied with Perry in the national polls, there is one poll out today [Tuesday] by Scott  Rasmussen and his Rasmussen Reports that has to have president Obama awake at nights.

If president Obama only leads Ron Paul nationwide by one point, and can only muster 39% support against Paul, he is going to get wiped out by someone who is not as kooky as Paul on foreign policy or out of the mainstream with some of his other libertarian views.

As Dick Morris says, when an incumbent is under 50%, he is almost surely to lose because almost all of the undecided votes will fall to the challenger.  Obama can't even muster 40% against Ron Paul.

Everyone says there is a long time to go before the election and how the economy could improve enough by the end of next year for Obama to make a comeback.  But president Obama does not have until the end of next year or even until November of next year.  It has been true, as far as I can remember, that the public's view of the economy is baked in around the summer time before the election.   What happens after that is too late to help the incumbent.   So, president Barack Obama has less than a year to get the economy turned around enough for the American people to feel positive.  That seems very unlikely. The unemployment rate a year from now will be in a best case scenario,  close to 8.5 %  during the summer of 2012.  That will not be good enough to come close to saving Obama.

The 2012 presidential race is looking more and more like Carter vs Reagan in 1980.   Just before the summer, a year before the election year, Carter and Reagan were in a dead heat [eerily close to the Romney vs Obama and Perry vs Obama numbers today]. 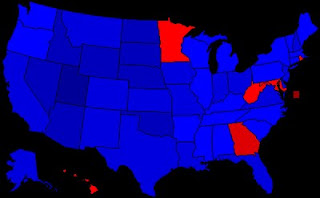 It will not be that bad for Obama because certain states that went for Reagan have become out of the running for the Republican nominee in these times: i.e., California, NY, etc.    But I predict, unless some drastic event happens or a change for the better in economic conditions happens within the next year, this election will not be close at all.  No waiting until the wee hours of the night to wonder who won this election.  The only question will be how big the future GOP president elect will have won by.