Semper Fidelis to the Fallen

Hat Tip:  Kathryn Jean Lopez of NRO and ABC News: Still Vigilant at the Tomb of the Unknowns

Despite Hurricane Irene, the tomb of the Unkown Soldier at Arlington National Cemetery remained, as always guarded.  August 27, 2011: 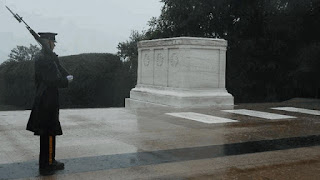 "While Hurricane Irene bears down on much of the mid Atlantic states on its way north, and residents of the Washington, D.C. area have been advised to remain indoors, the elite soldiers who are the sentinels at Arlington Cemetery's Tomb of the Unknowns remain at their posts.

Since taking over the mission on April 6, 1948, Tomb Sentinels from the Army's 3rd Infantry Regiment's "The Old Guard" have guarded the Tomb for 24 hours a day, 365 days a year regardless of the weather.

Email ThisBlogThis!Share to TwitterShare to FacebookShare to Pinterest
Labels: military