Another political blunder by the prez has hurt him in the polls.

I'm not saying I'm prescient but in my post The 'National' showdown in Wisconsin last Friday Feb. 18, I predicted president Obama's personal approval ratings would go down because of his stand in supporting the unions in the state matter.  It was an easy enough prediction, because as I stated in my post, every time Obama has opined on local matters [state or city] his poll ratings have gone down.  Of course it didn't hurt that Obama has taken the opposite view of the people on all those local issues.
This from Rassmussen Reports 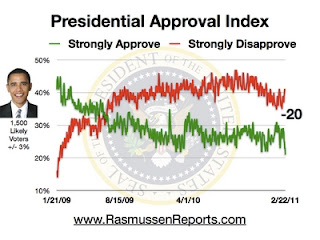