by NPR Staff
Rep. Gabrielle Giffords was re-elected to a third term in November.
Drew Angerer/AP 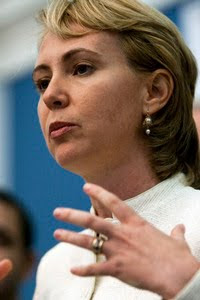 Rep. Gabrielle Giffords was shot in the head by a gunman at a public event in Tucson on Saturday. There are conflicting reports about whether she was killed.

At least eight other people, including members of her staff, were injured.

Giffords, who was re-elected to a third term in November, was hosting a "Congress on Your Corner" event at a Safeway in northwest Tucson when a gunman ran up and started shooting, according to Peter Michaels, news director of Arizona Public Media.

The suspect fired indiscriminately from about four feet away, Michaels said. A congressional official told The Associated Press on condition of anonymity that the gunman was using an automatic weapon.
Posted by Big Mike at 1/08/2011 02:37:00 PM