Rockets Only Second Team To Do This During Warriors Run

Since the 2014-15 NBA season, the Golden State Warriors have been an amazing team, being in the finals the last 3 years, and winning 2 NBA Championships.  This year they have reached the NBA Western Conference Finals against the Houston Rockets with the series now tied 1-1 to determine who goes to the NBA Finals in 2018.

Being a Rockets fan, I was ecstatic with the way the Rockets played in Game 2 this year against Golden State in their 127-105 rout of the Warriors [after losing badly in the first game of the series].  The defeat was so complete I noticed that the Rockets won all four quarters in the game.  I was amazed at that and wondered how often had that happened in the playoffs during the last four years of this great run by the Warriors. 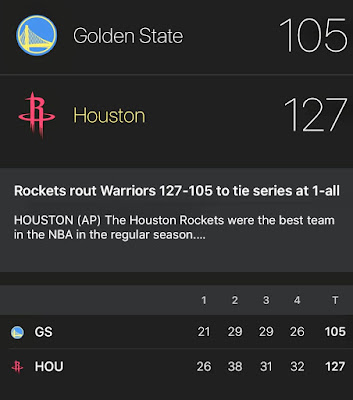 So, I looked up the box scores of all the Golden State losses in the playoffs since the 2014-15 seasons to see how many times they had lost in every quarter of a game.  The Warriors have played 74 games in the playoffs, beginning with their championship in 2014 and including this year's playoffs and they had lost 18 games.  Of course, they couldn't have lost all four quarters in a game they had won, and in the 18 games they had lost [including this last loss to the Rockets], in only one other game had they lost in all four quarters of a playoff game-the loss to the Cleveland Cavaliers in the finals on June 10, 2017, 137-116.

So, along with the Cavs, the Houston Rockets are the only other team to have beaten the Golden State Warriors in all four quarters of an NBA playoff game since the NBA playoffs in 2015.

Bravo, Houston Rockets!   Now, let's go on to shock the world and defeat the Golden State Warriors to reach the NBA Finals for a chance for this city's second Championship in a major professional sport in two years.